Paintings from the Past As a young girl, Helen first started her artwork attending classes at the Art Gallery of Ontario. Eventually, putting drawing aside she got into the mainstream working in the downtown area. In the late 50’s she married and after the birth of the first of two children, she took only part time employment so that she would have time to paint.

Helen has shown her work various places over the years including at many Art in the Park exhibitions in Toronto. During these years she used mostly oils, however, would also paint on surfaces other than masonite, such as black velvet, canvas and wood. (During the mid 70’s she began painting with watercolours and acrylics.)

Throughout the years, it was often on many trips throughout Ontario and Canada’s east coast that, Helen would sketch and paint, so well capturing and producing many rural and cityscapes.

Helen is a former member of The Etobicoke Art Group, Art Group 59 and Visual Arts Brampton.

Helen and her husband Frank now have their home in Dundalk, Ontario. It was during this recent move, and the fact being it has been up to half a century in storage for some of her paintings, that it was decided ‘there is no time like the present’ to finally have A SHOW OF HER OWN!  The show will be held in the Falls Gallery, upstairs. 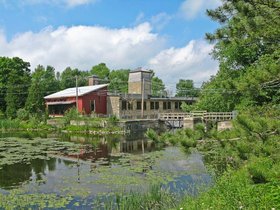